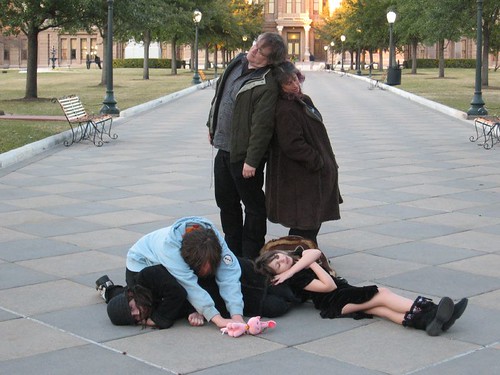 Click on the pic of Scott, Ivy, Summer, Sky and Winter suffering oh so gorgeously in front of the state capitol in Austin, Texas (EDIT) to get the rest of the Austin pics!

This was at about 6:30 PM, and we were still pretty fresh, but it represents what we felt like by the time the party was over.
We had an amazing time with the McClouds, cramming about a weekend's worth of fun and eating into twelve hours. It was so much fun we didn't want to move the next day--what could possibly top it?

pineappleinc has pretty thorughly covered our visit to Austin Museum of Art, I'll move on to the signing itself.

Brad Bankston did a great presentation of Scott and his work at Austin Books. There were Zot and Understanding Comics cupcakes, sodas and water (and a Starbucks double shot for me because I bitched, as I always do, about coffee). The line went through half the store and wrapped across the front, and didn't shorten until 9PM, when the signing was allegedly over. (Scott went until 9:30.)

While Scott signed and chatted, I recorded room noise and snuck in an interview with Brad.
Scott is really fun to watch, and someone to emulate. He gave time to each and every person who showed up. The very first person he signed for, Dei, said, "You saved my job."
How many comickers are told that?
I followed Dei outside and got some more details. He was teaching reading at a school in Eagle Pass. Almost all his students were unengaged with reading and failing. Dei started bringing in comics, and in spite of this making readers and pulling kids up from failing to C's and B's, Dei got in lose-the-job trouble for not teaching with the oh-so-holy curriculum.
Dei defended comics as lit with the help of "Understanding Comics," even managing to find a place where Scott's explanation of action between panels was parallel to the same idea in lit.

HOW COOL IS THAT?

Alas, I did not get it on tape, as I forgot triple A's.

pjoseph drove me to Walgreen's (at the cost of his swell parking space), and I got down to business recording Scott and his adoring throngs.

After the signing, and some parking adventure (which required all the Jerk Driving Skillz I acquired in San Francisco), we had dinner at Kerbey Lane. You know I was tired by that time--I had totally forgotten to take any pictures after 9PM. I did interview Scott, Sky and Summer for the DivaLea Show while we waited.
Brad extended his hospitality to dinner, which was some really good food!

That's all I have to say, except that it was so good to see you guys again and I could hardly stand to say good-bye! We miss you.

Had a great Mardi Gras here in Lafayette, Louisiana. Pictures soon, I swear!

Tomorrow, Wednesday, we'll probably be converging on The Blue Dog Cafe at 2:00 1:30 pm for lunch. We'll swing by tonight to make sure it's okay and post a bit later on tonight with confirmation. If you're in the area stop by and say hi!

I have a bit of catching up to do: So, on Sunday we went to the meeting of the Austin Sketch Club, where I was very anti-social and all I did was read Fun Home (by Alison Bechdel). What a great book. If you haven't read it, you really should. I had read bits of it before, but I finally had a copy that I could read uninterrupted, and that is what I did. It left me reeling a bit and kind of sad, but in a good way.

Monday, the girls and I had hoped to do something fun, but by the time we had checked out of the hotel and got to the movie, we had missed the show that would have ended in time for us to pick up Scott, so in the end, all we did is eat lunch. I had dropped him off early in the morning to a place in the middle of nowhere. When I picked up Scott later, he said that he had a good time there, it turned out to be a very positive experience, and people said very nice things about him. There is even discussion of him coming out again, maybe in the summer.

After picking Scott up, we got on the road as we had to get to Lafayette before we went to bed. The drive was not overly pleasant, first I had to deal with Texas roads, which I have now developed somewhat of a hatred of, then I had to deal with the dark, lots of trucks, more scary roads and too many bridges. I was not doing too well when we arrived. We had to eat dinner before we got to town as we were going to get there fairly late, and that meant that I had to drive much later than I would have liked.

Once we arrived at our hotel, our problems did not end. We got our room and Sky turned on the tv to find out what channel Veronica Mars was on. It wasn't. There was no CW. You need to understand that we had called the hotel before making the reservations, and we were told that they did get the station. Needless to say, Sky was very upset and long deliberations occurred. When Scott and I went to the desk to ask them if we were just missing the station, two people at the desk told us they got it, then they looked it up, and discovered they were wrong. In the end, we spent the night, but they got us another hotel for the next night (we had gotten this hotel through Expedia, so changing things was very complicated).

The other problem with that hotel is that they charged for internet, and each person was charged separately, this is why you didn't hear from me yesterday. Winter and I both chose to not go on line to save us some money.

Due to all of this, we checked out first thing this morning (which in McCloud Time means around noon), checked into the new hotel, verified that we did indeed get CW, rode around for a bit to find breakfast, then went to the events of the day. Mostly we hung out at the fair that was going on. Winter and I went on several rides (Scott was supposed to go with her, but in the end the three of us went on one, and Winter and I went on the other). I was reminded that I seem to like spinning around, and even though, I thought I couldn't do it any more, I guess I was wrong, as I had a really good time.

There was some Zydeco music being played, but, sadly, Winter couldn't deal with the volume, so I didn't get to hear as much as I would have liked. Then there were the parades. We found what we thought was an ok spot to watch from. The parades (turns out there were two) reminded me of the ones that they have in our (old) neighborhood, the only difference is that they throw things at you. Mostly beads. Lots of beads. Winter made out like a bandit, Sky collected some too, as did I. We are now all rather bead laden.

After the fair and the parades, we came back to the hotel to watch Gilmore Girls and Veronica Mars, then we went off to dinner. Veronica's episode was such that we talked about it most of the way through dinner. At dinner we befriended our waiter (Winter even gave him one of her necklaces), which is unusual in that usually it is a waitress that we befriend.

That takes us back here to the hotel where we just finished watching Studio 60, which I liked a lot. Winter is busy playing with her massive necklace collection.

Tomorrow (or rather today; Wednesday) is our Meet-Scott-Here-Lunch. We really hope you will show up if you are in the area, as it sounds like a great place. We have decided to meet there at 1:30 instead of the previously mentioned time, as we discovered that it closes at two until dinner starts at 5. We will call in the morning to see if we can get reservations (it was closed today because of Mardi Gras). We will keep you posted. This is where we'll be, please join us!
Collapse